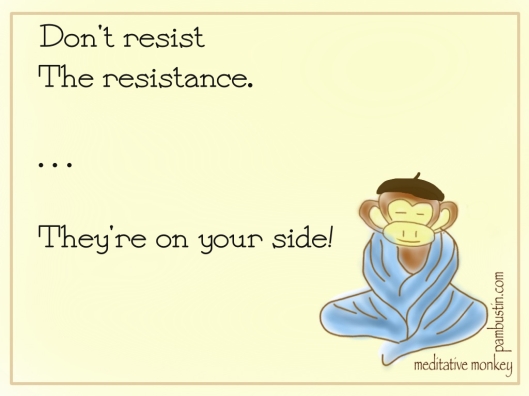 Today’s Thought from the Meditative Monkey:

“What you resist – persists!”

You know that old trick where you tell someone not to think about an elephant – that they can think of anything in the universe except an elephant – and then you watch them squirm as herds of elephants dance through their heads?

But you know what?  That’s OK.  It’s just what minds do. They run on and on and on like chatty Auntie Cathy with some tasty gossip from down the lane.

The more you resist or fight against these seeming “intrusions”, the deeper they will dig in.  Like a burr.  Like a tick slipping beneath your skin.  Burrow burrow burrow… Itch itch itch.

It’s enough to drive you off your mat (or cushion, or chair, or path you are walking…. however/wherever you meditate).

So how about this.

Take a step to the left and just… let them be.

Let them drift on through.  Don’t go to battle with them.  Just…don’t… engage.

It’s just a story you are telling yourself.

Sink into the stillness.

Don’t worry about the Monkey.  You can dance with her later.

The Monkey is always with us. 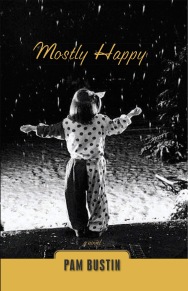 My response to my love of nature, my garden and local walks with my dogs.

ramblings from a renegade scribbler

Self Study
The Pink Notebook

A Pilgrim in Narnia

a journey through the imaginative worlds of C.S. Lewis, J.R.R. Tolkien, and the Inklings