It’s been a while since I’ve penned a post about my meditation practice.  Time to remedy that.

I had a grand experience last Saturday. I was contacted by a woman who is working on a paper about Vipassana meditation. More specifically about the 10 day Courses offered by places like the OVC (Ontario Vipassana Centre).  She came across my blog in her research and reached out to ask if I would be willing to do an interview.

I thought about it for a few days.  I googled her … in some kind of attempt to find her bonifieds.  I suppose I was trying to defend against some kind of uber elaborate phishing scheme or something.

Anyhow – I agreed to the interview because I like helping people out with reasearch and because I often learn stuff about myself when I am interviewed.  Being asked questions makes me think (of course) and, more importantly makes me … ARTICULATE my thoughts.  Not that I always do it well, but a good interview question can stick with me and allow me to do some more thinking long after the interviewer has packed up and gone home.

It was interesting to review my experience at the OVC.  I dug out the letter I wrote to Lady K soon after I came home.  I wanted to refresh my memory just a touch.  To reach back to how I actually felt when I emerged from the 10 days of silence and sitting and compare it to how I feel now.  I also wanted to refresh anything I thought might be a tasty tidbit for the interviewer.  Lord knows I never want to be boring.

There was a point we kept returning to during our conversation … it was something that I just couldn’t seem to… explain or illuminate for her and .. it was important.  It was connected to the very CORE of why I am drawn to Vipassana as a meditation technique and why I am continuing to practice.

It’s about the body, of course.  It’s about what I THINK I am doing by sitting and practicing Vipassana.

I started to blather on about that whole THING I have about how we can know things with our minds, intellectually, for a long long time before we really KNOW them in and with our bodies.  And that the knowing in and with the body is a somehow … DEEPER … knowing.  I blathered on for a bit and then I became almost … tongue tied.  I just couldn’t find the words I needed to describe the… difference between knowing in the mind and knowing in the body.

I went back to the strongest example I have from my own life.  I talked about my journey of healing from the abuse I suffered as a child.  About how I read and read and read and I went to therapy and how I knew very well that what happened to me when I was a kid wasn’t my fault.  Of course not. I knew that.  I understood it.  Sure.  Sure I did.  And yet…. I somehow DIDN’T know it at all.

I tried to tell her about that moment… The moment when… after all the reading and the therapy and all the knowing in my mind that it was not my fault… how one day it finally…. LANDED in my body.  And I cried and cried and cried and cried some more.  And it was like a … whoooooooosh… all through my body and my eyes were clearer and I could see and I was so much lighter and I was free and… THEN I could finally start to forgive myself and thereby finally truly start my healing.

And I told her to watch Good Will Hunting.  And we laughed.

And I kept saying something like… “It’s so hard to explain.  It’s like… You don’t know you don’t KNOW until you know.”

I just couldn’t find the words.

She asked me to try to find some simple words to describe how I felt before and after this grand revelation.  I stumbled and mumbled something about lightness and freedom but I could see that she still didn’t really get what I was trying to say.  I just couldn’t shine the light on it for her.

Later that day, during my late afternoon sit, it came to me.

During the interview, we’d talked about my visits to the Assistant Teacher during the course.  How I spoke with her about how… HARD I was working.  That I was tensing up my muscles in order to “feel the sensations on the body.”

“And you do not need to…” she scrunched up her face and held her body tense.

She commended me on noticing the tension in my body and said to simply… release it… when I became aware of it. I began to do that and it helped ease some of the pain I was experiencing.

Later, I got to thinking that if I had been sitting in front of her without my glasses on – that I might well have squinted up at her – trying to bring her into focus.  That this is what it felt  like when I was Sitting – that I had to WORK to find that focus. (More over in this post.)

When I got to thinking about the mad “you don’t know you don’t KNOW until know” thing… I realized that maybe I could also explain THAT a bit better to people with another glasses anecdote.

I got glasses in grade eight.  Back in the wayback we took eye exams right in the classroom.  You stood in the middle of the room, held a card over one eye and read the chart.

I had known for years that I needed glasses.  I knew this because I couldn’t read the blackboard from my usual seat in the middle of the classroom.  I never wanted to sit right up front in order to see.  Who wants to sit up front?  Not this kid who was always the new kid and totally did NOT want to draw undue attention to herself.  I couldn’t see the board, so… I just learned to write really fast.  I took my notes as the teacher talked.  They almost always SAY what they are writing on the board, so I did fine. Til that day in grade eight when I had to stand up in front of the entire class, hold the card over my right eye and say “E.  That’s it.  E.”

E was all I could see.  I debated memorizing the other letters as the other students read them off, but… ah hell, maybe I was just tired of writing so fast.  Time to take my punishment and become a dreaded “four eyes.”

Then came the day when I got my first pair of glasses.  Here we are again in the … words fail me section of the store.  It was… amazing.

I went outside and I just… gawped.  It was hard to not just… fall over.  I stood stock still until my mother shook me by the arm and asked what the hell was wrong with me.

I had no idea what I wasn’t seeing until I SAW it.

You don’t know what your can’t see until you can see it. 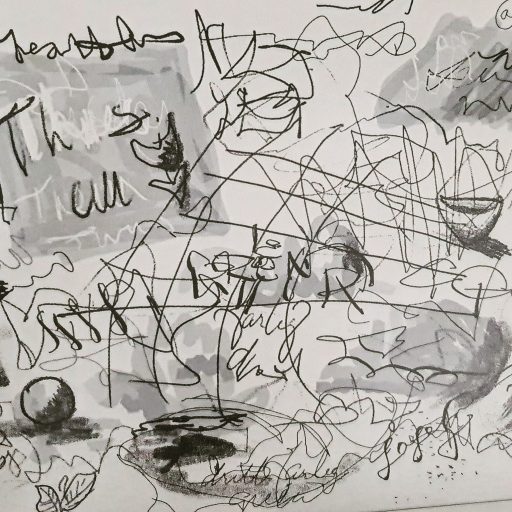